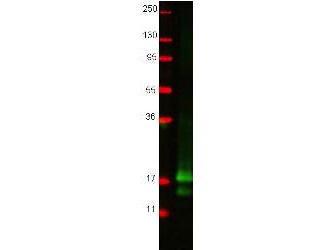 Interferon-G (IFN-G) is a dimerized soluble cytokine that is the only member of the type II class of interferons. This interferon was originally called macrophage-activating factor, a term now used to describe a larger family of proteins to which IFN-G belongs. IFN-G, or type II interferon, is a cytokine that is critical for innate and adaptive immunity against viral and intracellular bacterial infections and for tumor control. Aberrant IFN-G expression is associated with a number of autoinflammatory and autoimmune diseases. The importance of IFN-G in the immune system stems in part from its ability to inhibit viral replication directly, but, most important, derives from its immunostimulatory and immunomodulatory effects. IFN-G is produced predominantly by natural killer (NK) and natural killer T (NKT) cells as part of the innate immune response, and by CD4 and CD8 cytotoxic T lymphocyte (CTL) effector T cells once specific immunity develops.Applications:Suitable for use in ELISA and Western Blot. Other applications not tested.Recommended Dilution:ELISA: 1:20,000Western Blot: 1:500-1:2000Optimal dilutions to be determined by the researcher.Storage and Stability:Lyophilized powder may be stored at -20°C. Stable for 12 months at -20°C. Reconstitute with sterile dH2O or PBS. Aliquot to avoid repeated freezing and thawing. Store at -20°C. Reconstituted product is stable for 12 months at -20°C. For maximum recovery of product, centrifuge the original vial after thawing and prior to removing the cap. Further dilutions can be made in assay buffer.