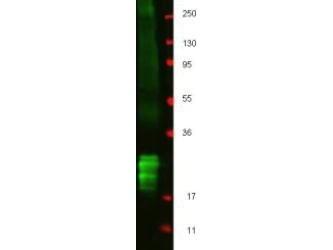 Type I interferons comprise a vast and growing group of IFN proteins. Homologous molecules to type I IFNs are found in many species, including all mammals, and some have been identified in birds, reptiles, amphibians and fish species. The mammalian types are designated IFN-a, IFN-b, IFN-k, IFN-d, IFN-e, IFN-t, IFN-o, and IFN-z (also known as limitin). The IFN-b proteins are produced in large quantities by fibroblasts. They have viral activity which is mainly involved in innate immune response. Two types of IFN-b proteins have been described.Applications:Suitable for use in ELISA and Western Blot. Other applications not tested.Recommended Dilution:ELISA: 1:20,000Western Blot: 1:500-1:2000Optimal dilutions to be determined by the researcher.Storage and Stability:Lyophilized powder may be stored at -20°C. Stable for 12 months at -20°C. Reconstitute with sterile dH2O or PBS. Aliquot to avoid repeated freezing and thawing. Store at -20°C. Reconstituted product is stable for 12 months at -20°C. For maximum recovery of product, centrifuge the original vial after thawing and prior to removing the cap. Further dilutions can be made in assay buffer.